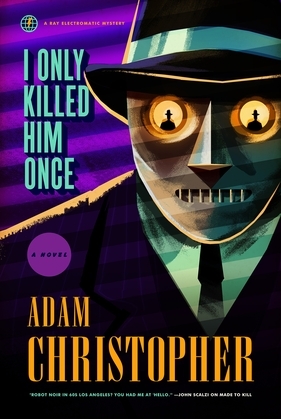 I Only Killed Him Once

A blend of science fiction and stylish mystery noir featuring a robot detective, I Only Killed Him Once, a stand-alone installment in Adam Christopher's Ray Electromatic mystery series.

Another Hollywood night, another job for electric-detective-turned-robotic-hitman Raymond Electromatic. The target is a tall man in a black hat, and while Ray completes his mission successfully, he makes a startling discovery?one he soon forgets when his 24-hour memory tape loops to the end and is replaced with a fresh reel?

When a tall man in a black hat arrives in the offices of the Electromatic Detective Agency the next day, Ray has a suspicion he has met this stranger before, although Ray?s computerized boss, Ada, is not saying a thing. But their visitor isn?t here to hire Ray for a job?he?s here to deliver a stark warning.

Because time is running out and if Ray and Ada want to survive, they need to do exactly what the man in the black hat says.

A man that Raymond Electromatic has already killed.