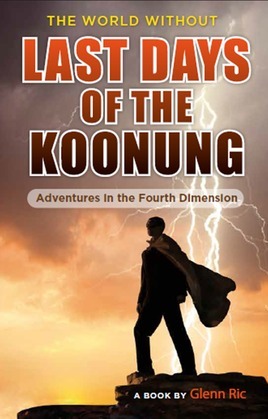 Persuaded by Adam’s older brother Mason, Adam and Tom climb the gigantic tree that grows in the bush of Edgars Valley. Unknowingly they cross the Gateway into the fourth dimension, ‘The World Without’, a beautiful place where the power of life is richer and greater than anything that exists in our world.

However, a decade’s long conflict rages between the long-suffering Marou and the tormented Fras who were recreated as lesser beings during the Diminishing, a catastrophic event brought on by Adam and Mason’s father when he was a boy. The Marou are steadfast and face their fate in the hope of being restored to their former selves. The Fras are filled with hate and seek revenge against the Marou, the boys and their father.

In Part 1, ‘Last Days of the Koonung’, Adam and Tom discover the power of this new world and learn that the Fras have found one of the Seven Life Elements lost in the Diminishing. The Elements imbue extraordinary power upon the holder. Although some of their power has remained with the Marou and Fras, it too has been diminished. The Marou seek the Elements in the hope of being restored. However, the Fras are intent on regaining the Elements to exact their revenge against the boys father who they call the 'Destroyer', and his family. Through circumstance and self discovery, the boys face their fears and weaknesses to help the Marou to prevent the Fras from using the power of the Element to destroy their world.