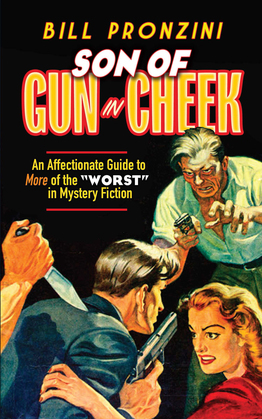 Son of Gun in Cheek

by Bill Pronzini (Author)
Fiction Mystery & Detective Short Stories
"I could hardly wait to begin the investigation. Somehow, I firmly believed that (at last!) we were following a course that would clearly reveal — something!" — from The Stingaree Murders
"The [police] men saluted in the darkness and stole away with furtive tread. They knew the anticlimax was at hand, and their satisfaction was unbounded." — from The Merrivale Mystery
"It beats the devil. It's diabolical. It's fiendish. It's just not right." — from The Palgrave Mummy
A humorous and good-natured study of alternative crime fiction, the Edgar Award-nominated Gun in Cheek celebrated the neglected classics of substandard mystery writing. After years of additional research into comically awful literature, author Bill Pronzini returns with Son of Gun in Cheek, a compendium of even more twisted treasures for connoisseurs of hideous prose. Pronzini's lively commentary offers background on each of the stories he cites, providing an informative survey of the genre and its writers, crowned with hilarious excerpts. His lighthearted look at the best of the worst in crime fiction will amuse not only mystery buffs but also anyone with a taste for ham-handed drama.