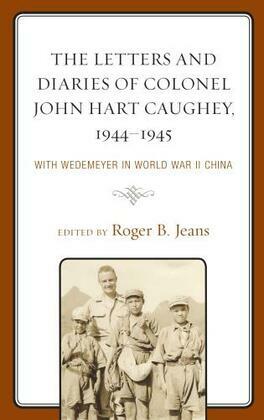 Colonel John Hart Caughey, a US Army war plans officer stationed in the Chinese Nationalist capital of Chungking, was an eyewitness to the battle for China in the final months of the war (1944–45) and beyond, when he rose to become head of the Theater Planning Section. In frequent letters to his wife as well as in several diaries, he chronicled the US military’s role in wartime China, especially his life as an American planner (when he was subject to military censorship). Previous accounts of the China Theater have largely neglected the role of the War Department planners stationed in Chungking, many of whom were Caughey’s colleagues and friends. He also penned colorful descriptions of life in wartime China, which vividly remind the reader how far China has come in a mere seventy-odd years.

In addition, his letters and diaries deepen our understanding of several of the American leaders in this Asian war, including China Theater commander Albert C. Wedemeyer; Fourteenth Air Force chief Claire L. Chennault (former commander of the “Flying Tigers”); US ambassador to wartime China, Patrick J. Hurley; famed Time-Life reporter Theodore White; OSS director William (“Wild Bill”) Donovan; Louis Mountbatten, Supreme Commander of the Southeast Asia Command; and Jonathan Wainwright, who was in command when the American forces in the Philippines surrendered in 1942, and who stayed for a few days at Caughey’s Chungking residence on his way home after several years as a Japanese POW in Manchuria. In his writings, Caughey also revealed a more appealing side of Wedemeyer, whose extreme political opinions in the postwar era probably cost him the post of US Army chief of staff. By making Caughey a member of his planning staff, Wedemeyer made possible an extraordinary experience for the young colonel during the war. Caughey also rubbed shoulders with Nationalist leader Chiang Kai-shek and traveled to the battlefields in Southeast China with the commander in chief of the Nationalist Army, He Yingqin, along with a number of other Chinese and American soldiers.

Following the Japanese surrender, Caughey chronicled the resumption of the power struggle between the Chinese Nationalists and the Chinese Communists, largely postponed during the conflict. Shortly after the war, he had a brief encounter with the number two Communist leader, Zhou Enlai, whom he was to get to know much better during the Marshall Mission to China.