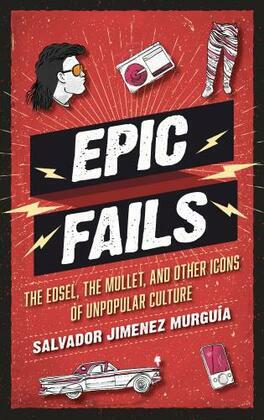 Many of the most successful innovations—from the light bulb to the Internet—have often resulted from ingenuity, ambition, and dedication. Such achievements have changed lives for the better. Yet for every new development that the public embraces, there is a dark side of progress: cultural byproducts that litter the road to obscurity. Just because something is a failure, however, doesn’t necessarily mean that it shouldn’t matter.

In Epic Fails: The Edsel, the Mullet, and Other Icons of Unpopular Culture, Salvador Jiménez Murguía examines some of the most iconic missteps of the past several decades. In order to shed light on the inherent, often comic strain in American life between fame and infamy, the author surveys some of the best—or rather, worst—of what man has to offer. From fashion flops like the mullet and Zubaz pants to marketing mistakes like Bud Dry, New Coke, and Crystal Pepsi, this text captures the unintentionally entertaining milieu of failure. Placing these gaffes in cultural context, Murguía considers how each of these products crashed and burned, while trying to arrive at an answer to the ultimate question: “What were they thinking?”

Whether these attempts were doomed from the start, failed because of consumer indifference, or were simply the victims of poor timing, this book returns them, however briefly, to the spotlight. A fascinating look at man-made disasters, Epic Fails is an entertaining treatise about the forgotten—and infamous—endeavors of American creativity, or lack thereof.