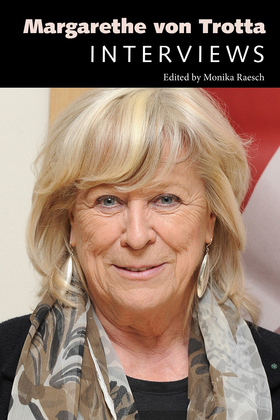 Margarethe von Trotta (b. 1942) entered the film industry in the only way she could in the 1960s--as an actress. Throughout her career, von Trotta added thirty-two acting credits to her name; however, these credits came to a halt in 1975. Her ambition had always been to be a movie director. Though she viewed acting as a detour, it allowed her to be in the right place at the right time, and through her line of work she met such important directors as Rainer Werner Fassbinder and Volker Schlondorff. The latter would eventually provide her with the opportunity to codirect her first film, Die Verlohrene Ehre der Katharina Blum (The Lost Honor of Katharina Blum) in 1975. The debut's success ensured von Trotta's future in the film industry and launched her accomplished film directing career.
In Margarethe von Trotta: Interviews, volume editor Monika Raesch furnishes twenty-four illuminating interviews with the auteur. Spanning three decades, from the mid-1980s until today, the interviews reveal not only von Trotta's life in the film industry, but also evolving roles of and opportunities provided to women over that time period. This collection of interviews presents the different dimensions of von Trotta through the lenses of film critics, scholars, and journalists. The volume offers essential reading for anyone seeking a better understanding of an iconic female movie director at a time when this possibility for women just emerged.