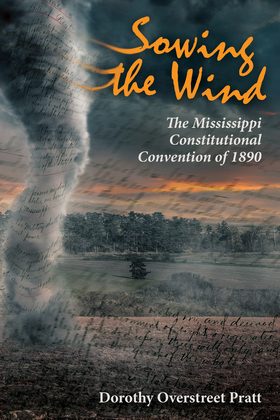 In 1890, Mississippi called a convention to rewrite its constitution. That convention became the singular event that marked the state's transition from the nineteenth century to the twentieth and set the path for the state for decades to come. The primary purpose of the convention was to disfranchise African American voters as well as some poor whites. The result was a document that transformed the state for the next century. In Sowing the Wind, Dorothy Overstreet Pratt traces the decision to call that convention, examines the delegates" decisions, and analyzes the impact of their new constitution.
Pratt argues the constitution produced a new social structure, which pivoted the state's culture from a class-based system to one centered upon race. Though state leaders had not anticipated this change, they were savvy in their manipulation of the issues. The new constitution effectively filled the goal of disfranchisement. Moreover, unlike the constitutions of many other southern states, it held up against attack for over seventy years. It also hindered the state socially and economically well into the twentieth century.