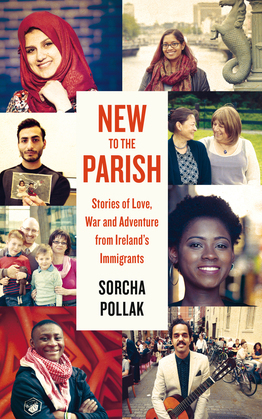 New To The Parish

An inspiring chronological timeline of personal stories of migration, New to the Parish takes us on a journey across the globe – from Cameroon to Myanmar, Poland to New York, Nigeria to Venezuela, Iraq to Syria – and back home again.

These fourteen stories are given context by succinct analysis of how world events over the past decade have played a role in the migration crisis; from the 2004 enlargement of the European Union to the economic recession, the outbreak of the Syrian conflict in 2011 to Angela Merkel’s welcome of over a million people into Germany, and from Brexit to the election of Donald Trump as US president.

Irish Times journalist Sorcha Pollak, whose own grandfather was a Czech Jewish political refugee who arrived in Ireland in 1948, provides a deeper understanding of what makes a person leave their native land, often in extreme difficulty, in order to start a new life abroad.

These are the stories of people who have come to Ireland for work, education, retirement, love and in some cases, out of necessity, forced from their homes by death and destruction. New to the Parish is an important reminder that every migrant is a human being, and that every one of us has a story to tell.