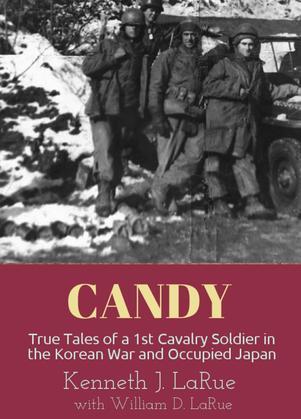 "CANDY: True Tales of a 1st Cavalry Soldier in the Korean War and Occupied Japan" is the coming-of-age autobiography of a small-town teenager going to war in 1950. Kenny LaRue is like many young men at that time who volunteer for the Army out of a sense of patriotism and duty. Through quirky circumstances, he ends up on the front line of Korea, where he remains firmly in denial he might be killed -- until he sees a buddy blown up by an enemy shell. Kenneth J. LaRue, in collaboration with his son William, tells this story in a no-nonsense way steeped in humanity and humor, including recollections of off-duty antics in Occupied Japan. The title "CANDY" is inspired in part by mispronunciation of Kenny's name by the young "bar girls" in Japan. Candy happens to be, too, a recurring element of his story, from the treats he gives to beggar children in Korea to the Army candy he used to settle his stomach after a brutal battle on Thanksgiving 1951.