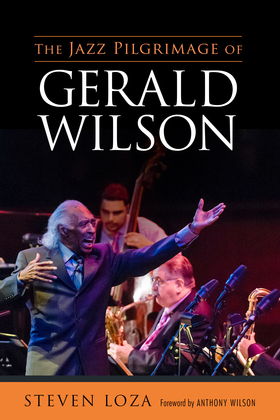 The Jazz Pilgrimage of Gerald Wilson

Jazz great Gerald Wilson (1918-2014), born in Shelby, Mississippi, left a global legacy of paramount significance through his progressive musical ideas and his orchestra's consistent influence on international jazz. Aided greatly by interviews that bring Wilson's voice to the story, Steven Loza presents a perspective on what the musician and composer called his "jazz pilgrimage."
Wilson uniquely adapted Latin influences into his jazz palette, incorporating many Cuban and Brazilian inflections as well as those of Mexican and Spanish styling. Throughout the book, Loza refers to Wilson's compositions and arrangements, including their historical contexts and motivations. Loza provides savvy musical readings and analysis of the repertoire. He concludes by reflecting upon Wilson's ideas on the place of jazz culture in America, its place in society and politics, its origins, and its future.
With a foreword written by Wilson's son, Anthony, and such sources as essays, record notes, interviews, and Wilson's own reflections, the biography represents the artist's ideas with all their philosophical, historical, and cultural dimensions. Beyond merely documenting Wilson's many awards and recognitions, this book ushers readers into the heart and soul of a jazz creator. Wilson emerges a unique and proud African American artist whose tunes became a mosaic of the world.