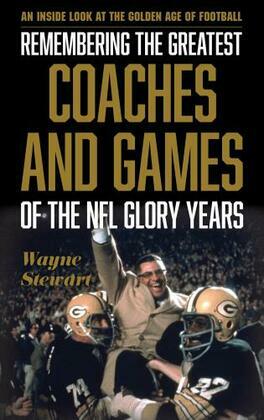 Remembering the Greatest Coaches and Games of the NFL Glory Years

The NFL in the 1950s and 1960s was full of iconic players and legendary coaches. Future Hall of Famers battled it out on the gridiron and roamed the sidelines, making for incredible games and memorable moments.

In Remembering the Greatest Coaches and Games of the NFL Glory Years: An Inside Look at the Golden Age of Football, Wayne Stewart tells of the men and events that made this era unforgettable. Through dozens of interviews with players such as Tom Matte, Mike Ditka, Raymond Berry, Don Maynard, Chuck Mercein, and Rick Volk, Stewart shares the players’ unique perspectives on the Greatest Game Ever Played, the Ice Bowl, the Heidi Game, and Super Bowl III. The second part of the book features profiles of the Hall of Fame coaches who led their teams to victory—including George Halas, Vince Lombardi, Tom Landry, and Don Shula—with the players reflecting on the impact these coaches had on and off the field.

Remembering the Greatest Coaches and Games of the NFL Glory Years not only shares anecdotes that reveal the warm and humorous sides of the Hall of Fame coaches but also includes breakdowns of the key decisions they made during the featured games. With exclusive insight provided by the players, this book offers readers a deeper understanding of professional football during this era directly from those who lived it.