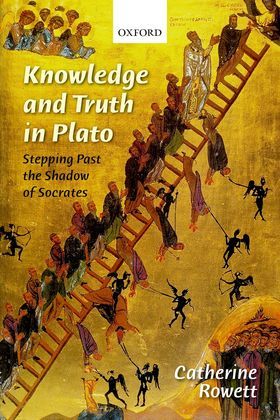 Knowledge and Truth in Plato

Several myths about Plato's work are decisively challenged by Catherine Rowett: the idea that Plato agreed with Socrates about the need for a definition of what we know; the idea that he set out to define justice in the Republic; the idea that knowledge is a kind of true belief, or that Plato ever thought that it might be something like that; the idea that <"knowledge proper>" is propositional, and that the Theaetetus was Plato's best attempt
to define knowledge as a species of belief, and that it only failed due to his incompetence.

Instead Rowett argues that Plato was replacing the failed methods of Socrates, including his attempt to find a definition or single common factor, and that he replaced those methods with methods derived from geometry, including methods that involve inference from shadows to their originals (a method which Rowett calls <"the iconic method>"). As a result we should see that Plato is presenting the knowledge that is acquired as non-propositional and pictorial in nature, and that it is to be
identified not with knowledge of facts nor of objects, but of types qua types-types that stand to the tokens that are used in our enquiry as original to shadow. The book includes detailed studies of the Meno, Republic and Theaetetus, and argues that the insights that Plato brings about the nature of
conceptual knowledge, its importance in underpinning all other activities, and about the notion of truth as it applies to conceptual competence, are significant and should be taken seriously as a corrective to areas in which current analytic philosophy has lost its way.