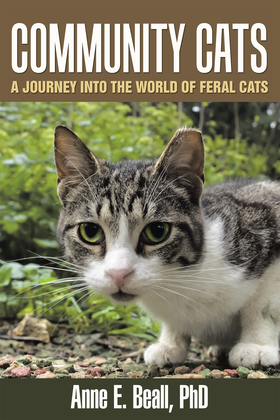 It all started when a rat ran over her husbands foot and author, Dr. Anne E. Beall, began a journey into the world of feral cats. The Bealls had experienced rat problems for a long time. Then a neighbor told them about a program called Cats at Work, where one could get feral cats that would take care of the rat problem.

Community Cats shares the story of what initially began as a creative solution to a rat problem and became a journey that led her to reach out to others in the feral-cat world. Beall interviewed other colony caretakers and leaders in the TNR movement and learned about how feral cats live, how they relate to one another, and how they relate to their caretakers. She also conducted survey research on Americans attitudes toward stray cats, TNR programs, and spaying/neutering.

Beall learned that feral-cat programs have a huge impact on the caretakers of the colonies, on the neighbors, on the community, and on the cats themselves, and she details those findings in Community Cats.