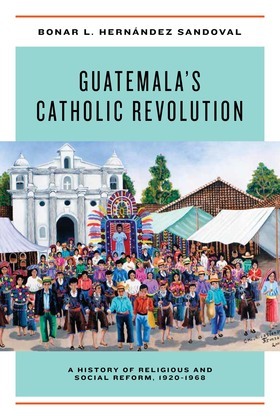 Guatemala’s Catholic Revolution is an account of the resurgence of Guatemalan Catholicism during the twentieth century. By the late 1960s, an increasing number of Mayan peasants had emerged as religious and social leaders in rural Guatemala. They assumed central roles within the Catholic Church: teaching the catechism, preaching the Gospel, and promoting Church-directed social projects. Influenced by their daily religious and social realities, the development initiatives of the Cold War, and the Second Vatican Council (1962–65), they became part of Latin America’s burgeoning progressive Catholic spirit.

Hernández Sandoval examines the origins of this progressive trajectory in his fascinating new book. After researching previously untapped church archives in Guatemala and Vatican City, as well as mission records found in the United States, Hernández Sandoval analyzes popular visions of the Church, the interaction between indigenous Mayan communities and clerics, and the connection between religious and socioeconomic change.

Beginning in the 1920s and 1930s, the Guatemalan Catholic Church began to resurface as an institutional force after being greatly diminished by the anticlerical reforms of the nineteenth century. This revival, fueled by papal power, an increase in church-sponsored lay organizations, and the immigration of missionaries from the United States, prompted seismic changes within the rural church by the 1950s. The projects begun and developed by the missionaries with the support of Mayan parishioners, originally meant to expand sacramentalism, eventually became part of a national and international program of development that uplifted underdeveloped rural communities. Thus, by the end of the 1960s, these rural Catholic communities had become part of a “Catholic revolution,” a reformist, or progressive, trajectory whose proponents promoted rural development and the formation of a new generation of Mayan community leaders.

This book will be of special interest to scholars of transnational Catholicism, popular religion, and religion and society during the Cold War in Latin America.