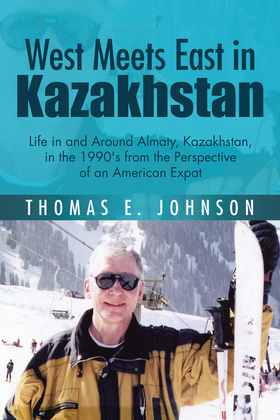 The author gained considerable experience of working in countries in the Soviet sphere in the 1980sYugoslavia, Poland, Czechoslovakia, and Hungarybut this did little to prepare him for a long-term stint in Kazakhstan, commencing at the outset of 1993. If his eyes were opened wide in Belgrade, Warsaw, Prague, and Budapest, they were bug-eyed in Almaty, Kazakhstan. There he keenly experienced the harshness and wonders of post-Soviet Kazakhstan.
The good news is that Tom Johnson wrote a series of articles for a local English language newspaper, The Almaty Herald, detailing his observations about life in and around Almaty in the 1990s from the perspective of an American expatriate. West Meets East in Kazakhstan is based on those articles, to which the author has added substantial new material. With wry humor, a positive attitude, and an easy-to-read writing style, the author recounts the gentle and not-so-gentle culture shock that he experienced.
It is difficult to describe the books content. Each chapter stands by itself and might be devoted to such topics as the following: the heavy weight of documentation required by the bureaucracy, the peculiar habit of carrying flowers with the wet ends up and the flowers down, the lack of public gathering places, or the outlandish nature of goodbye parties for departing expatriates. Several chapters describe the authors forages into the countryside to visit lakes, waterfalls, burial mounds, and singing dunes.
West Meets East in Kazakhstan makes a good read for anyone interested in life and living conditions in Kazakhstan, as well as the former Soviet Union. Foreigners who lived or worked in Kazakhstan during the period when the Communist economy was collapsing and before the market economy took root should particularly enjoy the book.