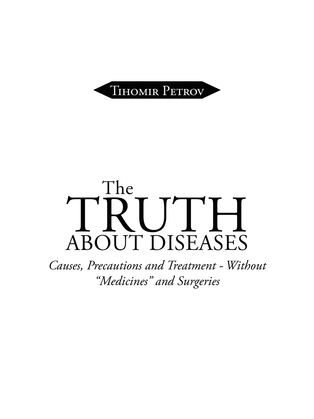 The Truth About Diseases

Usually, a man creates his diseases. In this book are explained the true causes for the diseases, principles of natural hygienewhich must be kept to prevent diseasesand the way of treatment, if they have occurred. Natural hygiene uses holistic/general way for treatment and maintenance of health.

If the wrong/false theories, which are taught in the medical universities, that the causes for some diseases are autoimmune, and other diseases are caused by viruses or bacteria, were true, most wild, free animals in nature would also be suffering from the same diseases, from which suffer people. The truth is that very few of these animals get sick, and it is usually due to disposal of poisons in nature by people.

The things are not so complicated as the doctors of the official medicine want to convince us. Otherwise, if there were at all live wild animals, most of them would also be ill, even if they had (veterinary) doctors, dentists, and doctors of pharmacy and their poisons called medicines and vaccines.

We are creators of our tomorrow, and there is no need to pay to a divinerwhether he is a doctor, a lawyer, a priest, or a bankerto tell us what will happen to us tomorrow. Nothing special will happen. The inevitable will occurwe will reap what we have sown.