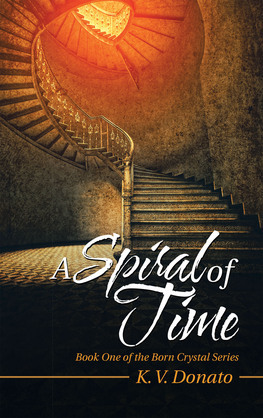 A Spiral of Time

When twenty-two-year-old Deacon Rainer takes a blow to the head from a falling tree limb, he has no idea that his life is about to change forever. In his pain, he sees a vision of his late father, who tells him of an alien invasion twelve years ago and of the quest Deacon will soon undertake. As he falls unconscious, he is immersed in a long and detailed dream. But is it something more?

Aphrodites Crystals, the children of Venus, are in the clutches of the malicious warlord Obsidian and his army of ferocious flesh eaters. Aress secret red legion, lurking inside the lava tubes of Mars, must race to rescue them in time. Although the Crystals trials are many, they will not give up. Later on, in the sanctuary of his new abode on Mars, a young Crystal named Onyx, comes to believe that there are Crystals residing on Earth. He wants to communicate with them, and fortunately the humans of Earth have sent an unmanned spaceship to Mars, allowing him just the opportunity he needs.

The first book in a series, this science fiction novel tells a tale of alien and human life, friendship, betrayal, love, and hate as a diverse group of beings fight the forces of evil.