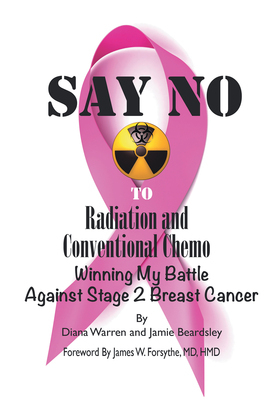 Say No to Radiation and Conventional Chemo

Internationally acclaimed integrative medical oncologist James W. Forsythe, M.D., H.M.D., has praised Diana Warren for courage and tenacity in her arduous
battle against Stage II breast cancer. Doctor Forsythe insists that Diana deserves kudos from people around the world, for refusing to subject her body to
unnecessary standard chemo and radiation that unscrupulous allopathic oncologists kept trying to require her to endure. Featured in many hot-selling books
written by others including media personality Suzanne Somers, and also the author of many successful books himself, Doctor Forsythe has hailed Diana for
her dogged determination amid a non-stop quest to find effective natural, non-toxic treatments as her health deteriorated, while also hunting for an
experienced doctor licensed to avoid high-dose poisonous options. I strongly recommend that everyone who suffers from cancer read Dianas compelling
tale, Doctor Forsythe said. Today, Diana is playing a formidable role in helping to lead the way as a true champion in a quest to inform the public of
the urgent need to avoid toxic treatments when feasible in certain circumstances, and how to find acceptable natural remediesplus the importance of
avoiding standard-of-care chemo and radiation when under the care and guidance of a qualified, licensed medical professional. After reading many
hundreds of books on cancer, Doctor Forsythe hails Dianas publication as being by far among the best from the viewpoint of a person who never attended
medical school. Readers undoubtedly will benefit when learning of the exceptional example Diana has set for us all.