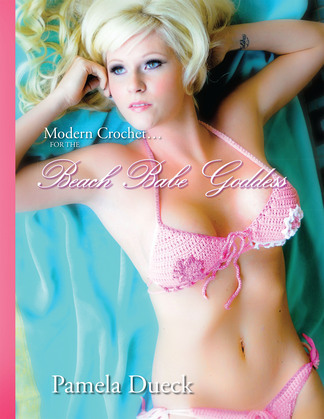 I started crocheting when I was a teenager, because my grandmother did. Her work was so beautiful, and I wanted to create something just as beautiful. My mother taught me how to sew and read a pattern, so I new the combination would help me design anything. My first garment was a sweater with a shell st design, it took me about 3-6 months to finish, so that was my last crochet project for 15 years. When I became a hairstylist, I had days when it was a little quieter, so instead of puttering around cleaning everything over and over, I decided to take up crocheting again. This time I found a book called How to Crochet by Pauline Turner. I learned a few new stitches and decided to start with an afghan, I got bored and put it in a bag in the closet. I finished it about 4 years later.
I decided to make a halter-top; after all it was summer. I decided to design it myself, like I always did. I like to have a one of a kind outfit that suits my personality. I actually finished it in a couple days; it was the best feeling in the world. I wore it to work the next day, and sold it to one of the girls that came in the shop. She offered me too much money to say No. A couple days later another girl came in the shop and asked me if I made crochet bathing suits, she was a friend of the girl who bought my halter. I told her that I hadnt made one before, but Ill give it a try. She ended up ordering 2 bathing suits. Thanks Nicole for inspiring me to try designing something new. Thats where my interest in designing crochet clothing began.
If youre like me, you get bored easy, you like to complete projects in a reasonable amount of time, and you enjoy the satisfaction you get from creating a project on your own, then this book may be the one for you!
I decided to change the way I did my pattern layout, so reading it would be easier. It seemed too confusing to read any other pattern (eg: repeat R4-8, 4 more xs, then alternate R2 and 3 till pattern measures 14). So I decided to make it simple to read and to check off each row as I finished it, so I wouldnt lose my spot in the pattern.