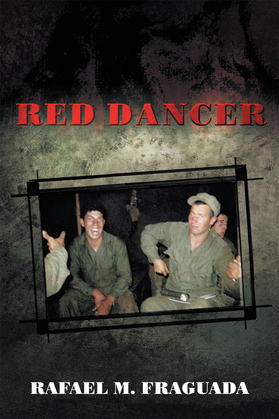 While in a fine state of total inebriation, Gabriel drained his vein onto a sand dune and perceived a most perfect being. A godlike image appeared on a starless night while in country. This powerful force would permit him safe passage through the conflict if he would replace an eyelash lost in a childs dream and return to the world or home with the souls of his dead comrades. His five-year-old niece had given him an earring for good luck before he left for the war. He wore the black crescent shape on a silver chain around his neck alongside a Saint Christopher medal. This earring made it possible for him to return home with the souls of his more unfortunate companions.

Back from Southeast Asia, he enters a saloon in New York City and chats with the owner. He mentions he had served overseas. This man asks for a quiet moment and summons the patrons to propose a toast. No one takes him seriously as he is in his cups. When the bartender turns up the jukebox, the room resumes its convivial atmosphere of the 60s free love and introspection. Realizing he is not amused, he leaves for an evening with a war buddy and his young family. Its the commencement of his postwar experience with souls in tow. He finds solace with his body wasted. My bodys aching and I cant find my way home, like the song plays out.

His years pass with no great interests, and he gets by well enough with a day-to-day existence but has accomplished nothing but keeps himself in blue-collar work and in more barrooms. When he meets up with a wealthy acquaintance from a tiny Midwest college they had attended, he thinks of him as a shimmering deity of sorts. Wings, the handsome poet who drove his hunter green Morgan sports car through Lake Forests bright autumn afternoons down Sheridan Road scattering bushels of fallen leaves with selfless irony, a smirk and no smile, now conversed regularly with Gabriel who thinks him quite the fellow in the sense that anyone with that amount of wealth should be able to do the greatest things. Wings had married while still in college, and his wife gave birth to a daughter who kept him out of the draft. The child was another mans progeny. Wings too had to survive the war.

His conversation of manuscripts, investments, inheritance, love entanglements with no resolution or sense didnt matter to Gabriel. It made him feel wealthy by association. One evening on a walk through Central Park, they and Wings daughter, Ruth, sat in a clearing to enjoy a bottle of wine. She slips a pill into Gabriels cup without him batting an eye as they were out to enjoy themselves. Wings leaves abruptly. Ruth follows shortly. As night falls, he finally goes in search of his two friends. He approaches a big man cloaked in an animal skin who is armed with a large broad sword. Gabriel inquires about his friends and is aggressively attacked. In short order, he has this man on his knees crying for help, which he cant see. A woman comes to the fallen mans aid, but he mistakenly strikes her with his weapon.

The former marine awakens the next the morning and is arrested for the death of a woman not far from him. He is released on bail and is presented with the opportunity of taking the fall. After a short term in a psychiatric hospital, he would be recompensed with a rather large sum of money. Wings had arranged this to collect monies for himself and his daughter. His wife had gone through his fortune.

Gabriel had never dreamed of such machinations. His honor is at stake as that of his fellow war companions. He decides to make a stand and dons an expensive navy blue suit over his service automatic and grabs a dagger. On his way to Wings coop, he finds himself walking through Central Park. The intense clamoring of his men on his mind causes him to stumble and fall for an instant. He shakes it off but doesnt know who he is. In the waning daylight, he wanders through a sett