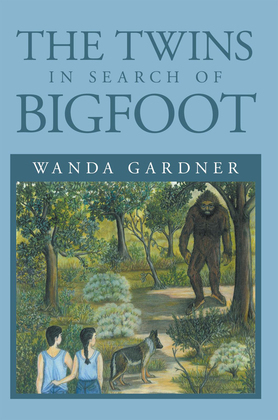 The Twins in Search of Bigfoot

After their parents were killed in an automobile accident when the twins were two, Sarah Fay and Shannon Ray are twins being raised by their grandmother on a small farm on the edge of a wooded area in the beautiful Ozarks area of Missouri. Sarah loves to eat and sleep so Shannon has his job cut out for him on weekends when he tries to get her out of bed early and down to the fishpond. Sarahs love of Grams delicious blueberry pancakes often helps Shannon get her to the pond Saturday mornings.

This sunny, Spring Saturday seemed a normal day as the twins made their usual bet about who caught the biggest fish so the loser would have to make the other twins bed all next week. The day turned out to be anything but normal.

When their German Shepard dog, Rex, joined them at the pond, they decide to play their usual hide from Rex game while he was splashing in the pond.

Rex quickly finds them and on the way back to the pond, Rex senses danger. Seeing his strange behavior and realizing there is an even stranger, creepy silence in the woods, they stand quietly on the path where Rex, with the hair on his back raised, stopped suddenly. A huge, hairy creature slowly stepped around a tree into the clearing not twenty-five feet from where Sarah and Shannon stand frozen with fear behind their trembling dog. The creature was so close they could smell him. His stench was so bad it almost made them cough. The creature roared, then stepped back where he stood near a tree watching them before he disappeared into the woods.

Rex, no longer sensing danger, led the twins safely to the pond. While jogging back to the house, Shannon informed Sarah he could hardly wait to tell his friends at school Monday about seeing a Bigfoot.

Monday brought great disappointment to Shannon when his friends wouldnt believe him.

Sarah, seeing how crushed Shannon was by his buds nonbelief, helped him come up with the plan to get solid proof of Bigfoot.

The plan had been perfected, put in place, and was proving successful when suddenly Bigfoot needs help. Could the twins come up with a rescue plan in time to prevent a Bigfoot from drowning in an abandoned well?

Thanks to Shannons strength and Saras bravery they are successful in helping Bigfoot save his child.

When the Bigfoot family is safely united and has gone back in the woods, Shannon realizes the family could be in serious danger if they present their proof.

Shannon has learned some things are far more important than having friends believe you. Knowing hunters might shoot them, he decides to keep quiet about Bigfoot and his family to protect them. After all the woods is their home.