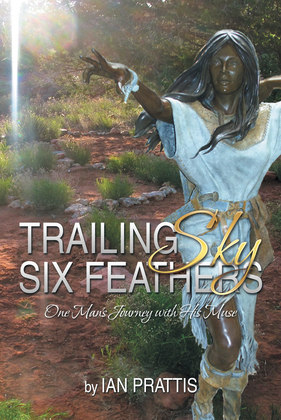 We are all staring into the abyss: climate change, ecosystem and financial collapse, nuclear breakdown, corruption, terrorism and anarchy. Instead of being eaten up by it all I say, "Awaken Spiritually," as that transforms everything. Trailing Sky Six Feathers sheds light on issues that will affect our world for generations to come. This exciting Hero's Journey is like Indiana Jones meets the Buddha with a dash of Celestine Prophecy. The story told shines light on the darkest elements of the human condition, including my own. This challenging journey has me stumbling through the first part of life, then standing strong in my own sovereignty in the latter part.

In this book I navigate past and present life experiences from brutal raids on Indian settlements in 18th century Arizona, insane sea voyages off the Scottish Hebrides in the 20th century to surrender to The Muse in the 21st century. These screenplay epics weave together to create inspiration for a wide range of spiritual seekers, environmentalists, Generation X, feminists, younger generation and academics alike.

We follow my journey to accept The Muse capable of transforming karma from violence and abuse to clarity and purpose. Readers will travel the pages as I learn to embrace The Muse, Trailing Sky Six Feathers, a South Western Native American wife and medicine woman in whose arms I died in 1777. She vows to find me to complete my purpose despite resistance from my highly intellectual mind in this lifetime.

My severe and challenging journey includes shamanic healings of childhood sexual abuse, guru training as well as a near death experience in an ashram in India. Trailing Sky Six Feathers initiates a dream vision in 2008 that caps my slow process of remembering a clear mosaic of experience stretching back in time two hundred and thirty one years. Over a period of thirty years, four extraordinary medicine people enhance my process of remembering, while Trailing Sky waits patiently from the distant past. I learn how to reconfigure my understanding of time, place, consciousness and Carl Jung's psychology. I choose to listen to the feminine voice of Earth Wisdom rather than to the multitude of competing voices in my deep unconscious.

Past life memories collide head on with the present, all thanks to the persistence of Trailing Sky Six Feathers, the Muse who refused to give up. Karma is reversed, the internal battles are over as I begin to live life as a Meditation for Gaia. The relentless shadowing by this engaging Muse brings understanding not only to me, but to anyone engaged in overcoming the darkness of their past.

This book caps my long-term fascination with consciousness. As a Professor of Anthropology and Religion I taught courses on Ecology, Symbols, Engaged Buddhism and Meditation Systems. I am a healer, mentor and educator, able to encourage people through example to find their true nature so that humanity and the world may be renewed. This story is offered as a gift to our planet. My purpose in life is to share my wealth of experience on how to live in harmony not just with ourselves but with the place we call home... earth.

In 2010, after an intense internal dialogue with my Muse, Trailing Sky Six Feathers, I asked if I should write her story. There was a long silence that stretched into infinity until I finally heard her affirmation. I stood up and reached for my backpack and took out a writing pad. There was a gold plated fountain pen in the pack, rarely used. I inserted an ink cartridge into the pen and sat in a chair overlooking the sea and mountains on the west coast of British Columbia. Putting pen to paper I started to write the first line of this book:
"Put down your weapons, my husband," she said quietly with steely insistence.