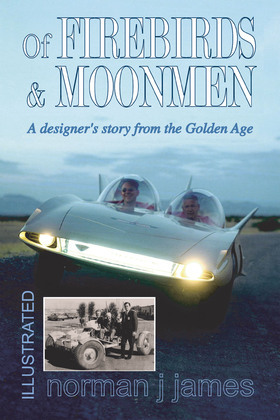 This is a designers story from the Golden Age, of Firebirds and Moonmen. It is the authors story of how, through chance and circumstance, he was to live a 13-1/2 year odyssey, working with the most talented people in General Motors, on two of the most exciting projects that anyone could ever dream of. At GM Styling, under Harley Earl, to become responsible for the design of the Firebird III, the gas turbine experimental car that, half a century later, can arguably be considered the arch-typical representation for the concept car. Then, to follow that, to become involved in the earliest serious development of manned and unmanned vehicles for lunar exploration, and for hardware that rests on the moon today.

The story is told in three parts. First is the early period, where hardships and family bonds temper and condition a polio survivor to abandon his high school preparation, to become a mechanical engineer, and to accept a college scholarship to study Industrial Design, an art curriculum, at Pratt Institute in Brooklyn, New York. This period continues, almost as a condensed course, on the fundamentals of design. Key elements evolve around the teachings of mentors Alexander Kostellow and Rowena Reed.

In the second phase, the author is in Detroit and the methods and politics of General Motors Styling, during the height of the Motoramas, are detailed. The design of the Firebird III is the heart of the book and is its reason for existing. As the last surviving member of the four principals in its design (Harley Earl, Bob McLean and Stefan Habsburg being the others), the author feels obligated to assure that the story behind those closed studio doors is told. The story progresses from the Firebird IIIs inception, as a Harley Earl vision, through its design and build phase then to its Motorama film production, for presentation in the main ballroom of the Waldorf Astoria.

In the third phase, the author makes a career change, transferring to an aerospace organizational structure and accepting his role as a team player, responsible for carrying out his skills in the support of team objectives. Industrial design, conceptual and drawing skills are applied in the Mechanisms Group for the formulation of mechanical systems on manned and unmanned lunar exploration vehicles. The excitement of realizing that the group was in on the ground-floor of lunar exploration is only tempered now by a dj vu feeling: of realizing that NASA is once again at that same point in time, planning for a return to the moon in 2024.

During this period, the author served under Sam Romano, who would later become the head the Lunar Roving Vehicle (LRV) program, with Dr. Greg Bekker as the Chief Scientist and Ferenc Pavlics as the mobility expert. These people, and others, are the Moonmen.

Of Firebirds & Moonmen is heavily documented with photographs, illustrations and graphics, which were prepared at General Motors as proposal and contract deliverables. They are supplemented with personal photographs and other graphics collected or prepared specifically for the book. All illustrations, corporate and personal, are by the author.

The book is a fun read, and many amateurs old enough to remember the early days of spaceflight will relate to the path James followed as a telescope maker and amateur astronomer

Excerpts from the book are included in GMs online living history Generations of GM Wiki, in celebration of their centennial anniversary in 2008. The authors contribution is on the Firebird III, its inception as defined by Harley Earl and its first "flight," in filming for the 1959 Motorama in Mesa, Arizona.