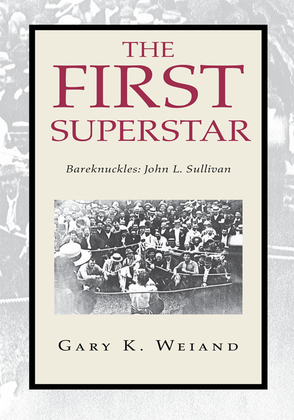 The First Superstar tells how John L. Sullivan forged the link between media and sports by being such good copy that the papers of the 1880s couldn't help but report his every move. What Babe Ruth's homeruns were to baseball, Sullivan's knock-outs were to boxing, and Sullivan came first. The heavyweight title was created for him.

He toured the country at the then-fabulous total of $500 per night, routinely offering a thousand dollars to anyone who could last just four rounds. His country loved gentlemen, so he always insisted on gloves, which was protection against the law. Toasted, first in America, then around the world, he called Teddy Roosevelt and Prince Albert "friend."

The greatest fighting man ever, he tried to be the greatest drinker and profigate, too. After binging all day, he'd revive on his way to a fight, knock his opponent out as if he were a distraction, then head for the nearest bar. He'd slam down C-notes, buy drinks for the house, and leave the change. Between bars he'd scatter coins to the kids. Lines formed on his trains, because everyone knew he gave to anyone who asked.

But it caught up to him. Sick and broke, he agreed to an illegal bareknuckle fight to be held in New Orleans in July of 1889 against Jake Kilrain. It was got up by an editor who wanted to cook the drunk to death. He promptly went on a four month bender that left him totally unfit, with less than two months to go.

Only William Muldoon, a wrestling champion and the founder of the physical culture movement, could rescue him. Together they dominated America's front pages with its greatest story. The outlawed 72 round fight became legend, its popularity leading to the legalization of boxing. Muldoon became America's first fitness guru.

Sullivan returned to drinking, and infamously drew the color line against Peter Jackson, who might have become the first Black champ. Then, after touring for three years, he lost to Jim Corbett. Sullivan drank away a fortune, actually going bankrupt, but in the end became a temperance lecturer.