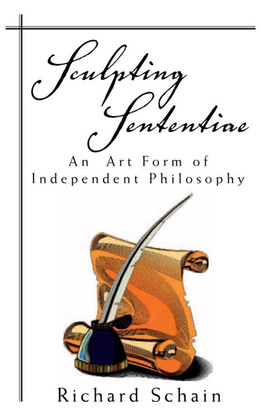 SCULPTING SENTENTIAE An Art Form of Independent Philosophy contains 406 original sententiae (statements) plus a preface discussing why the author considers this type of philosophical writing to be an art form. It represents a radical departure from the contemporary university approach to philosophy as a scholarly discipline. Unlike discursive prose, sententiae do not entertain or support the reader on a flowing current of language. Here the mind does not analyze, it apprehends, it sees. If the ultimate purpose of art is the awakening of consciousness, the significance of a sententia is to be found in its ability to produce this awakening not only in the reader but in the writer as well.

The sententiae in this work have been grouped in five categories: Philosophy and Religion; Philosophy Among the Ancient Greeks; Bourgeois Existence Today; The Philosopher as Artist; Bywork. An appendix with translations of the foreign language phrases is provided. The three essays included at the end were originally published in the electronic journal Philosophy Pathways. These are: Significance of the Sense of Holiness; The Problem and Promise of Consciousness; Fame - The Last Infirmity of the Noble Mind. These essays present in discursive prose many of the ideas that are more directly and succinctly expressed by the sententiae.