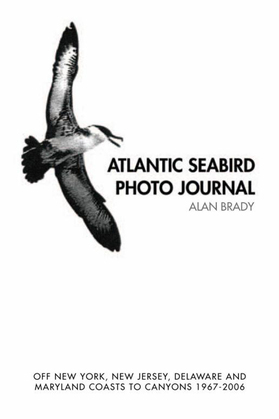 This collection of notes and photographs of offshore trips and sightings along the
coast, along with some photos outside the study area were made from the late sixties
onward. My sea-birding companion Armas Hill and I have made the effort to collectively
collate the many thousands of sightings. All the photographs made out of our study area
are so marked. I thank Ken Kitson for assisting in the production of the distribution and
population chart, as well as Elizabeth Brady for drawing the map of the covered area,
and Sally Brady for her drawing of the European Storm-Petrel.
Without Captain John Larson and his Miss Barnegat Light and the great captains
and crews aboard, as well as all the Ebles with their Doris Mae, this would have been
an impossible task. The Atlantis and the White Star as well as Captain Garrisons
boat in 1967 that found us an albatross (even though the captain was too embarrassed to
admit to his fellow captains that he was taking out a group of bird watchers!) Things
have changed.
Kate Brethwaite, John Danzenbaker and Jim Merrit were almost always aboard
when we began the pelagic trips. Laurie Larson, Doug Gill, Irvin Black, William Boyle,
Joseph Burgiel, Pete Dunne, Richard Kane, Alan Keith and Harry Wallum were among
the many on early trips. Several thousands more have been on the approximately three
hundred fi fty canyon trips it took to complete the information and photos covering this
study. All these birders are a great part of this book.
Other mentors who showed us the way and corrected my mistakes with grace were
Robert Ake, James Akers, Paul duMont, Peter Harrison, Paul Lehman, Brian Patteson,
Jon Pearson, Betty Phinny, Richard Roulete, Will Russel and David Wingate.
For the scanning and processing of photos and text and the time devoted to the
project, I thank Elaine and Chuck Crunkleton, excellent birders and good friends.
Elaines son, Tim Ryan, also deserves much thanks for providing his computer expertise
for the layout process. A special thanks to Kathy Horn, whos impecable eye smoothed
out many, many problems.
Photographs by the author.