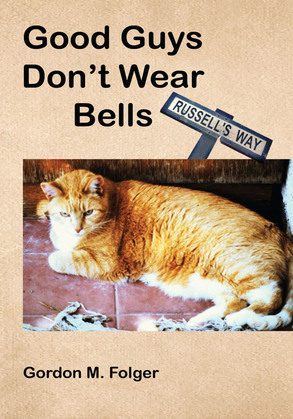 Good Guys Dont Wear Bells transports the reader to a realm of human insight punctuated by the
unexpected arrival of a new and very different family member. This member, Russell, a cat, proves to be
an influence for change and understanding.
Spread across three distinctly different venues, Russells life experiences begin with his mistakenly
being locked in a closed rental house on Nantucket Island only to be rescued by the new occupants
who are destined to be his future family. From there his adventures are transferred to the long-since
vacated backyards of downtown Detroit and the urban-renewed courtyards of the townhouses
replacing them. Here he overcame numerous adversities and misadventures. His later life was spent in
the Middle Eastern country of Qatar where he reigned supreme in his last conquest, a small backyard
garden. Here he was united with a recent addition to the family, a Siamese queen named Starlight
who had been added while he was wintering in Nantucket. This union was to blossom into a lasting love
affair.
In the years spent with his new family, he assumed the responsibility of their conversion from dog
people as he molded them into cat lovers. This task he accomplished readily and with little fanfare
as his human family worked and played. Accompanying this conversion his familys feline associations
dramatically increased, the result of the rescue of a multitude of cats rendered homeless by the first
Arabian Gulf War. Even with this and the ever-present Starlight, Russell remained the star.
A moving story of love and pathos, Good Guys Dont Wear Bells will captivate its readers and bring
them to a true understanding of feline-human bonding.