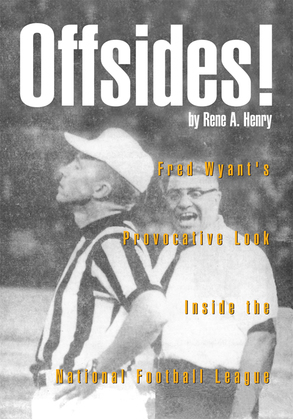 Should owners and coaches allow players who perform on the field to abuse women, drugs and alcohol off the field?

Where are the role models in professional football today?

Why do officials miss calls? What calls do they miss most? Is instant replay the answer?

Are the TV announcers always right?

Why should the public pay to build stadiums for profit-minded owners?

Are the NFL officials as experienced as they should be?

Fred Wyant, who spent 19 of his 27 years as an official in the National Football League as a referee, answers these and other questions in Offsides!

Wyant also was the only referee in the NFL to also play quarterback in the league.

The cover photograph of Vince Lombardi screaming at Wyant was taken by Wally McNamee and was picked as the "Best of the Year" by the White House News Press Photographers Association.

The book is filled with humorous anecdotes and also details the responsibility of each of the seven officials and how each member of the crew is challenged with more than 1,500 decisions in a game.

It also is G-rated with no profanity.