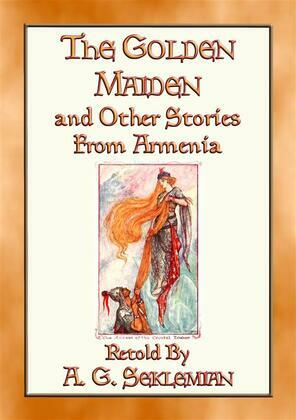 Herein are 29 Armenian Fairy Tales and legends. Some of these stories may have a familiar ring and others will be entirely “new” to the reader despite them being millennia old.

The Betrothed Of Destiny

The Bride Of The Fountain

Bedik And The Invulnerable Giant

The Maiden Of The Sea and many, many more.

A distinguished English student of folk-lore wrote: “Armenia offers a rich and hitherto almost untouched library of folklore.” Never before has such a true statement been made, for Armenia sits astride the main northern arm of the Silk Route – the one which runs north, from Persia and the ancient city of Persepolis through the valley of Ararat and the Caucasus corridor to the Black sea to the capitals of Northern Europe.

It is along this axis that stories, goods and spices were traded. Initially this was an East – West trade, but as Europe grew and matured this became a two-way trade with European culture and customs travelling East and Eastern culture and customs travelling West, all through Armenia where a great deal of them were deposited and took root. So it is from this source that these tales have been drawn – and we’ve only just scratched the surface.