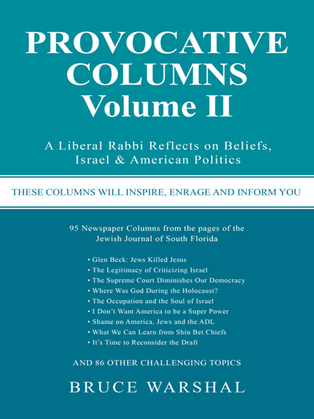 The Jewish Journal of South Florida is the largest Jewish newspaper in America. It boasts an open marketplace of ideas on its opinion-editorial pages, featuring columns from the left and the right on the political and religious continuums. Rabbi Bruce Warshal upholds the liberal tradition both in politics and religion on those pages.

This collection of columns, which originally appeared in the South Florida Jewish Journal from 2009-2014, lives up to its title. The writer a lawyer, rabbi, publisher, and Jewish community executive is a provocateur par excellence. He pulls no punches, challenging conventional wisdom on issues of religion, the Middle East, and American Jewish life. Some will agree, others not; but all will be engaged and educated by his forceful and informed presentation.