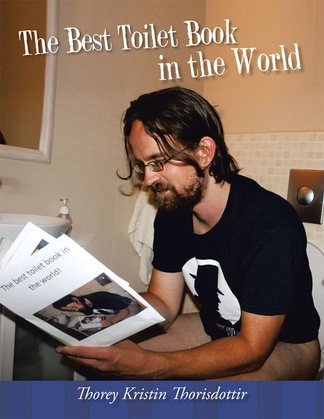 The Best Toilet Book in the World

I grew up with my dad asking frequently where the newspaper was, while my brother was occupying it for half an hour on the toilet every day. Today I live with a man who has a whole library sitting in the bathroom. Thus I started to think that what the world seriously needs is a TOILET BOOK.
The book is nonfiction and contains clips from my life from summer 2011 until October 2012, or since I decided to move to another country and get married. When you move to another country you have to face several challenges, amongst others being a speechless idiot, having almost no social life what so ever, desperation for friends, trying to be cool, attending some horrific Danish courses, trying to survive the first year of marriage and figure out where the beer is cheapest, to name a few.
I have tried to set the book up in a comic way since you have to have a humour for yourself to survive the first year in a new country! Everyone who has come into my life during that year is now a victim and a real part of the book!
Summary: This book is about everything and nothing, but mostly nothing. Enjoy, and remember to flush!