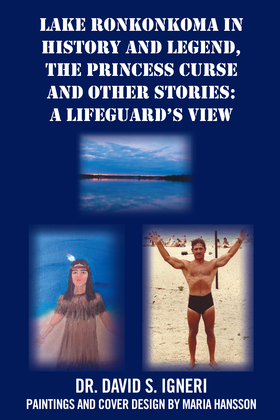 Lake Ronkonkoma in History and Legend, the Princess Curse and Other Stories: a Lifeguard’S View

The History and Legends of Lake Ronkonkoma, the Princess Curse and Other Stories; A Lifeguards View, discusses the history and the folklore of Long Islands largest lake. It builds a strong case for the Princess legend.

The author consulted professional opinions, of paranormal experts, who generally believe curses are real, not superstition. He also consulted many sources on Lake Ronkonkoma, to focus in on the fact that a young male has drowned almost every year, and that few females have died in the Lake. In fact it remains, that possibly only one female lost her life. Her official cause of death was kidney failure, caused by secondary drowning.

The volume also chronicles the lifeguard career of the author, David S. Igneri. His lifeguards at the lake and his other beaches were, in general gifted athletes. However, to lifeguard Lake Ronkonkoma they needed specific training that was not covered in their regular lifeguard preparation. At first, Igneri himself, did not totally understand the task before him. However, he sought advice from older lifeguards, and read everything he could about Ronkonkoma, and formulated a program.

In his early years he did not believe in the Princess Curse at all, and believed it was only superstition. His experiences during that time, made him re-think his views. Gradually he realized that some force or entity was causing, or helped causing the many deaths.

David Igneri began to change his policies at Lake Ronkonkoma on July 5, 1965. He totally believes that the spirits told him what to do. His goal became to protect and save all of the people, all of the time, and stop the legend. After reading this volume, you will have to decide for yourself, how much success he had in this endeavor.