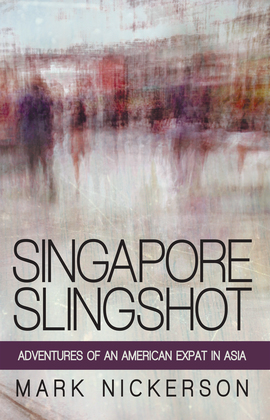 In the summer of 2006, author Mark Nickerson was in his midthirties, still fresh-eyed and uncorrupted by life as a foreigner, when he and his wife, Gwen were granted an opportunity to relocate to Singapore. He felt he was accelerating his career with this move, and, in fact, he had been angling for this opportunity for a long while. It was to be a two-year assignment. They stayed for five.

In Singapore Slingshot, he presents a collection of anecdotes on living as an expat in Singapore and his travels through nineteen countries over three job changes. Brutally honest in his opinions, he managed to keep a sense of humor as he often struggled and occasionally succeeded in establishing his life as an expat. Nickerson offers a glimpse not only beyond what can be taught in books about conducting business in high-growth Asian economies but also at a level much different than what is shown in the often sugarcoated and tourist-centric travel guides.

Singapore Slingshot paints a vivid picture of what its like living and learning on the fly in one of the most dynamic and diverse regions of the world. Both humors and poignant, Nickersons tales of living in Asia are ultimately a reflection of a much more personal internal journey every expat eventually takes. He saw his life change in ways he couldnt have imagined while the experience gave him a much different view of the world and his place in it.