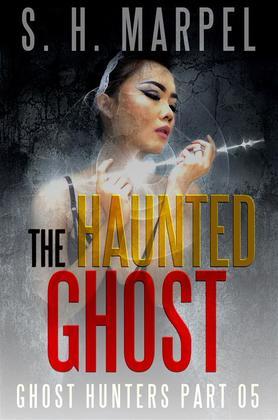 This ghost was haunted by someone or something else.

None of her doing, but prevented her from moving on. Everytime someone would try to talk to her, the castle around her started collapsing on that visitor.

John Earl Stark was given this assignment with the help of his spirit-guides Sal, and Jude. Unlike the others they had completed together, this one required skills they never before had to develop. A double haunting. And mortal risk.

In this story, John, Sal, and Jude also explore an undercurrent of their deepening relationships.

This story adds to The Ghost Hunters saga with a new part, as their cosy paranormal mysteries continue.

“I don’t know why castles and ghosts always seem to need dark and overcast weather to be so dramatic.” I said when the shimmering stopped.

We were at the castle in one of the upper rooms. A high, vaulted roof was partially still intact overhead. There were only blank walls, and the floor had a massive hole in it, directly below the missing roof portion. Sal and Jude both had lit spectrals in their hands. Little blue-white flames that appeared just off the tip of one finger. Bright enough to show what a person needed to see, but too bright to look at directly.

I’d read about these, but this was the first I’d seen either of them using one.

Sal nodded, “These should help with the general gloom. Just to give you the layout.”

Jude added, “We are going to put them out and stand over to each side as lookouts. When the specter shows up the room will be bright enough. But don’t wait to engage her. We think the light is what brings the interference.’

At that, they both moved away from me, skirting the piles of rubble that appeared here and there across the floor.

They extinguished their spectrals and we waited.

A yellow-greenish light appeared and a woman walked in from beyond the wall, dressed in some white linen with some sort of gold or light tan rope that crossed her chest and circled her waist. Fetching, even in the light she gave. From her knees down, she fades to transparent, and the movement of her knees and hips, along her forward motion were the only indicators she was walking. Both hands held a single tapered candle in front of her. The greenish light came from its tip. But there wasn’t a natural shadow below her, or an unnatural one. It simply went dark before and after her. The light seemed to go through her as well, like a glowing sphere of light that had nothing to do with a flame. It showed up the wall as she came through it, then faded as she walked away from it and toward me.

I could see well enough to know that there were no rubble piles between us. I started walking immediately in her direction, with a long pasture-covering gate. “Hey there! What’s your name and how can I help you?”

The specter stopped at this, a puzzled look crossing her face. “I’m Margaret. And, sir, who are you?”

“Call me John. Do you know what date it is?”

Margaret’s puzzlement turned into a frown. “The 4th of January.”

“Can you tell me what year it is?”

The frown deepened. “1898, of course. Are you jesting with me? Everyone here knows…” She took one arm to include the room and an expected audience but found only the bare walls, and myself standing in front of her. “I think you are playing a trick on me, sir. Where have you hidden the party? What have you done with the party decorations, the tapestries, the long tables of food and drink?”

“Margaret, this isn’t some sort of jest. You’ve been dead for some time...”

Get Your Copy Now.