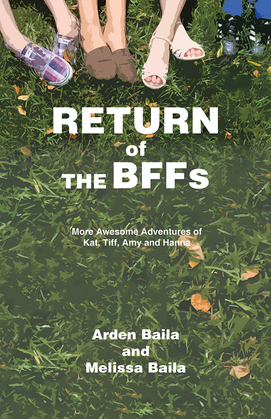 Return of the Bffs

Ten-year-old girls Kat, Tiff, Amy, and Hanna met for the first time at summer camp when they were grouped together in the same cabin. At first, sparks fly as they struggle with their differences, but these unlikely friends not only survive camp, but they end up being best friends.

The four girls meet again to celebrate Tiffs birthday in style. But Kat, a sarcastic tomboy; Hanna, a bookworm and computer geek; and painfully shy Amy, clash with Tiffs snobby friends. Chaos at the birthday party threatens to break up their close relationships. As Tiff struggles with the test of true friendship, Amy finds herself forced to face her biggest fear, while Kat and Hanna stir up even more commotion and conflict with their attempts to keep the four together.

Will their differences drive these best friends apart? Or will their friendship survive the mishaps and misunderstandings that seem to flare up whenever the four are together?