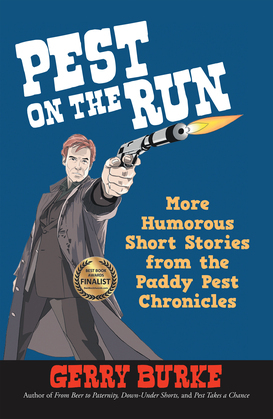 Pest on the Run

Paddy Pest is a hero to himself and others. Youd better believe it. The man has been fighting crime all his life and although he does have his shortcomings, he does try hard. Bless his heart, he really tries. And now, someone has put out a contract on him. Is there no justice?

Luckily for Paddy, his wing-person is the exquisite barmaid, Stormy Weathers, his longtime girlfriend and undercover perative. There is no more potent a force in the fight against corruption and wrongdoing, and the supersleuth is the favored go-to man for any number of international agencies. Admittedly, when the chips are down, they are always prepared to disown him.

Paddys relationship with Australias unmarried prime minister has tongues wagging, but in times of trouble, she wouldnt have anyone else by her side. And his relationship with Frankie Hogan, the bordello queen? Well, thats another story.

Paddys tales of intrigue are unbelievable and even Maxwell Smart would be impressed. He makes that gentleman look like a genius.