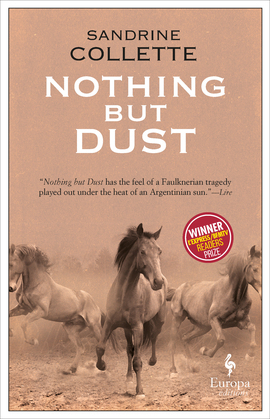 By the time Rafael is born, the family farm has already gone to hell. Rafael's father has abandoned them. His older brothers, the twins Mauro and Joaquin, blame Rafael for their father's departure and exact revenge on their baby brother. Steban, his other sibling, is a simpleton whose affections and allegiances change with the shifting winds. Ruling over this dysfunctional roost is a tyrannical and avaricious mother.

On the lonely Patagonian steppe, life is lived to the rhythms of the family farm. But there is nothing bucolic about the existence described in these pages: it is ruthless, unforgiving, and bloody. As the family tensions mount, daily life degenerates into open warfare.

Reminiscent of Coetzee's Disgrace, Chatwin's In Patagonia, the Dust Bowl novels of Steinbeck, the writing of Cormac McCarthy, and the southern gothic of William Faulkner, Nothing But Dust is a gripping, unsentimental, ultimately majestic story about life in one the most inhospitable places on Earth.