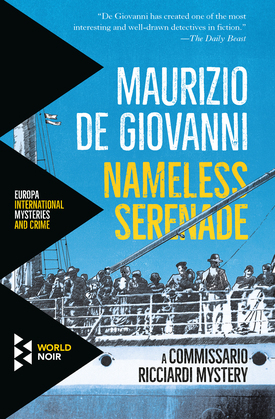 That autumn it seemed the rain in Naples would never stop, and Commissario Ricciardi found himself having to face not only a homicide but long-buried feelings that have grown thick roots inside him.

It's been over fifteen years since Vinnie Sannino left on a ship for America without telling anyone. During that decade and a half, Vinnie found fame, success, and wealth as a boxer, becoming the middleweight champion of the world. But that all came to a terrifying halt when his last opponent died in the ring and Vinnie lost his desire to fight.

Now, he's back in Italy in search of the woman he left behind, Cettina, the love of his life. But Cettina has moved on. She's now a woman, a married woman. Or, she was until recently. Her husband, a wealthy businessman, has been found murdered. There's no murder weapon to speak of. He was killed with a single blow to the head, not unlike the blow that felled Vinnie's opponent in the ring on that fateful night in America.

For Ricciardi, and his partner Maione, it is going to be a long, rainy, and deadly autumn.