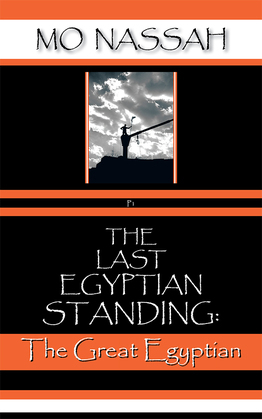 The Last Egyptian Standing: The Great Egyptian is produced herein as a written format of a story based around real events that took place before, during, and following the Egyptian Revolution in the year 2011. The story is mainly from the eyes and angle of one very special young man. From before the moments of chaos and rioting began and then hit peak, MN80-M. HASSAN THE SPECIAL ONE/MALE finds his spirit suffering between heart and mind whether or not to accept the life as it is in this day and age and continue his chosen normal life, or to just join-in with everyone on and off of the streets of Cairo,
the main city in Egypt, during the 2011 Egyptian Revolution. At the same time, another window of opportunity opens for the possibility to follow his emotional instincts that have been restraining his heart and mind for such a long time now, especially from before the 25th of January 2011 early start into the Egyptian Revolution. Or, also the simple possibility to just sit back and watch everything un-fold from the Television at home in the United Kingdom.

MO NASSAH, born in 1980, has written several unpublished novels and dozens of short stories that until this moment in time, he felt not to publish and share with this World, until now. This story and book herein being the first published book from a set series created and written by the Author MO NASSAH. He said, she said, is exactly what happens in this version/book, and over eighty (80%) percent of this book is a true story. Hence, a reason the words of each character (to the Author) was/is more important for the first book to be written in exactly this way, and/or form, for the reader(s) of each book to truly appreciate, and understand at-least some of that to come in the second, third and fourth book of this part of the entire MN80-M story series starting as, The Last Egyptian Standing: The Great Egyptian. In 2011, MO NASSAH lives alone in his birth place location, the cosmopolitan city of London, England, United Kingdom.

From the outspoken and brilliant start until the end of this entire true story, the author allows us the readers to enjoy the read as we enter a new World. A whole new dimension with real life CHARACTERS and personalities that capture the heart of each reader from the very first chapter, when all of the chaos begins, in Egypt. Full of excitement, passion adventure, love, envy, fear, betrayal, success, murder, mystery, fantasy and much much more. As sad, and as happy, as some of these events may be to some, this is a true story, and a part of the History of Mankind now, the History of you, and I. Especially with the main character MN80-M. HASSAN THE AMAZING ONE/MALE alive.