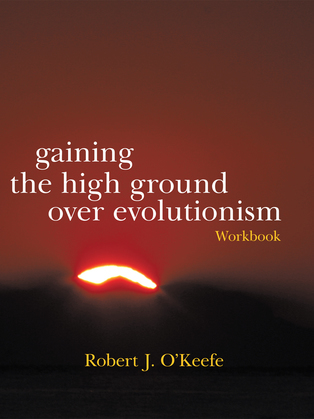 Gaining the High Ground over Evolutionism-Workbook

The controversy surrounding the origin of the universe, earth, and all living things is an ongoing debate in the public sphere. In Gaining the High Ground over Evolutionism, author Robert J. OKeefe presents analysis leading to the realization that to obtain knowledge of origin is also to discover the origin of knowledge.

Gaining the High Ground over Evolutionism recognizes the ideological nature of the topic of origin. It steps out of the realm of science and begins to deal with the question by reviewing the scientific revolution
and its implications in Western thought, studying the interpretation of Genesis 1, and describing relevant aspects of the history of geology, biology, and astronomy.

OKeefe summarizes science as a means of gaining knowledge and discusses the scientific method as it is applied to natural history. He examines how the court system has dealt with the controversy; draws points from C. S. Lewiss argument against naturalism; and then confronts the ideology behind evolutionary science, the philosophy of naturalism, presenting what he sees are the best arguments against it. Finally, he summons back the grounds for the authority of the Bible and discusses the partnership of reason and faith.

Expanding the scope of inquiry beyond the confines of science, OKeefe shows that the idea of a creator needs to be attended with more seriousness than post-Enlightenment science and philosophy have ever thought necessary.

This workbook contains questions specific to each chapter of the main book, an answer key, and a special section, Challenges of the Skeptic, containing
challenges to belief typically posed by skeptics along with possible replies.