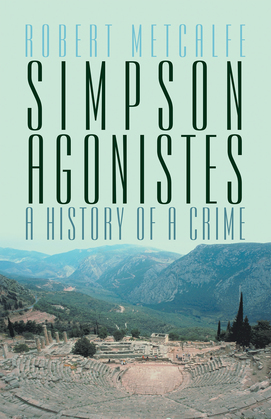 It was called the trial of the century in a century whose end is now a decade in the past. But its impact has reverberated well into this one, as its subject continues to make headlines. In Simpson Agonistes, author Robert Metcalfe offers an original angle on the O. J. Simpson murder case and trial using Herodotuss lost perspective as a guide.

Simpson Agonistes revisits the Brentwood murders and their aftermath from two opposite perspectives. One is a modern, fact-based reinterpretation of pieces of the key evidencethe uncut left-hand glove and the thumps on Kato Kaelins guesthouse wallthat have never been satisfactorily explained. The other perspective discusses what Herodotus would have had to say about this case as Metcalfe begins a study in nemesis or retributive justice.

He applies both methodologies to an analysis of what went wrong that fatal night to spoil an almost perfect crime, as well as changes to Simpsons story since. Simpson Agonistes presents a scenario that often reads like a tragedy or psychodrama, complete with a catharsis at its close.