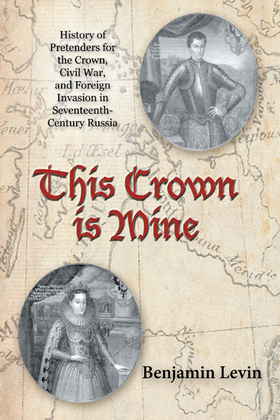 This Crown Is Mine

In the early 17th century, Russia went through a foreign invasion and the nations first civil war a time so horrible that it acquired its own name in Russian history: The Times of Troubles. Internal and external forces came together to create a storm of such magnitude that it threatened the very existence of the nation. The country lay in ruins and a foreign army occupied Moscow. For a while it seemed that Russia would never become an independent nation again, but the Russian people found enough strength and courage to stop the civil war and unite against foreign invaders.

Two young people played a most important role in these events a pretender to the Russian throne who called himself Tsarevich Dmitry, son of the late Russian Tsar Ivan the Terrible, and Marina Mnishek, the girl with whom he fell in love while on the run from then Russian Tsar, Boris Godunov. Dmitry invaded Russia with a small band of adventurers and defeated Godunov. He and Marina were married and crowned in the Kremlin. Two weeks after their marriage, Dmitry was killed in a riot and Marina was exiled to the far North. But she escaped, and took part in a civil war herself. Twice she came to the walls of Moscow with an army and two different men by her side, fighting for her crown.

This is a true story how a young man of uncertain ancestry and a young woman from a family of Polish nobility forced history to engrave their names into the list of Tsars families of Russia. In their adventures, fights, travels, love stories, and turns of fate throwing them into the depths of despair and raising them to the heights of power and wealth, this couple lived more exciting lives than millions of other human beings put together.