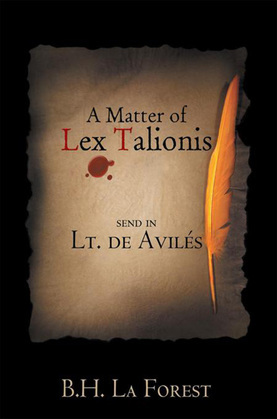 A Matter of Lex Talionis

A violent bombing in Detroits Mexican community kills a number of people, while leaving many more severely injured. DPD Lt. Andre De Avils witnesses the incident while working a lone surveillance. Known for his nightly outings de Avils skillfully gathers his own tips and leads. Tonight, the Intel Duty Officer and Andre has put together a lengthy surveillance package on a potential smuggling operation.

After the bomb detonates, the investigation moves a quickly as beautiful ATF supervisor, Jocelyn Otxoa, joins Andre and his squad. An ATF National Response Team (NRT) arrives the following morning. After a shaky start, Jocelyn and de Avils are soon involved in separate criminal violations that they must tie together. In the meantime, their personal relationship ignites with a sensual frenzy that must remain tempered and out of view of their respective offices.

Case momentum accelerates rapidly as Mexican cartels begin to snipe at each other, fighting to erase their competition. Former ETA assassins . . . in Basque Country and Quebec, try to reconstitute their renegade group. After stealing powerful Torpex explosives from World War II stockpiles in Britain, they are in the testing phase before their all-out assault on Spanish authorities. In America, the man from Quebec pressures his corrupt Federal sourcescrooked government agents and supervisors, for goods and services not covered in their job descriptions.