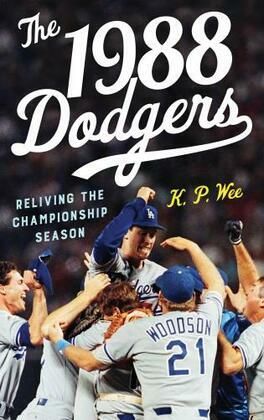 When most baseball fans think back to the 1988 World Series between the Los Angeles Dodgers and Oakland Athletics, they probably remember Kirk Gibson’s dramatic home run off Dennis Eckersley, Orel Hershiser’s shutout streak and dominant postseason pitching that got them there, or perhaps the fact that it remains, to this day, the last World Championship for the Dodgers.

In The 1988 Dodgers: Reliving the Championship Season, K. P. Wee tells the story of this incredible year. More than just Gibson or Hershiser, the team’s success came from a true collective effort in which all 25 players on the roster made significant contributions throughout the season. Featuring dozens of interviews with players—including those lesser-known Dodgers who were just as important to the team as the stars—coaches, scouts, and general manager Fred Claire, Wee provides a refreshing view of the 1988 season, sharing personal stories and little-known anecdotes told to him by the players and staff. The players also reflect on the importance of the entire team that season, their careers following the World Championship, and life after baseball, giving readers a complete inside look at a season and team to remember.