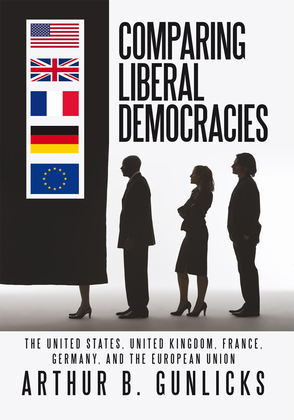 In this age of a globalism, understanding the governments and politics of other countries is important in understanding the world around us. In Comparing Liberal Democracies, author Arthur B. Gunlicks contributes to this understanding in a discussion of the institutional structures and backgrounds of four liberal or Western democracies: the United States, United Kingdom, France, Germany, and the most state-like international organization, the European Union.

Gunlicks provides a systematic and thematic (rather than country-by-country) approach that promotes comparisons of similarities and differences based on variables and concepts familiar to American and European students and the attentive publics in Europe and North America. After laying out a historical background, he explores liberal democratic, semi-democratic, and non-democratic states; territorial organization; presidential versus parliamentary political systems; separation of powers and checks and balances in these different political systems; electoral systems; legal systems; and the liberal democratic welfare state.

A comprehensive core text, Comparing Liberal Democracies provides the background and concepts necessary for a better understanding of liberal democracies in general and of the American and major European democracies in particular.