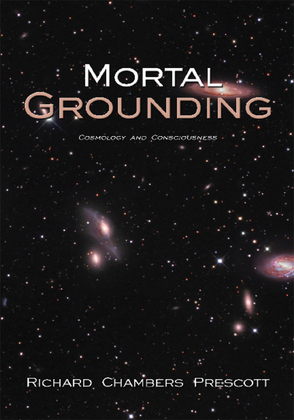 To see more manuscripts by Richard Chambers Prescott go to Scribd.com and enter Grascott or PrescottRC.

This manuscript, Mortal Grounding, has a simple thought in mind. To bring together our modern cosmological knowledge with our understanding of what is consciousness. It is something of a task to unite these two styles of comprehension about our existence, as much as it is to join quantum physics with general and special relativity.

The idea is that both want to reach the source, the source of what is cosmological and what is consciousness. It seems simple enough. Cosmology studies the creation, searching for the creator of it all, whatever that may be. Consciousness seems to look more at what is the creator in order to understand creation. They are parallel and reversed, but both seek to understand, re-link, comprehend or unite with the Mystery.

This Universes Given Moment of reaching, of conscious mortal becoming, grounded on Earth, for the brief moment, life to death, yet in and as a rare something more, the rarest star stuff circling back as consciousness that is able to grasp its origin, without a direction transposed as times beginning. This would be one idea of mortal grounding.