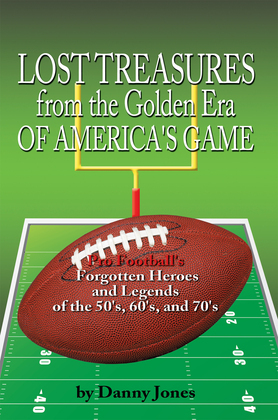 Lost Treasures from the Golden Era of America's Game

Lost Treasures from the Golden Era of Americas Game: Forgotten Heroes and Legends of the 50s, 60s, and 70s, focuses on Pro Footballs forgotten stars from the glorious past. They were outstanding players who somehow slipped through the cracks of immortality and should be in the Pro Football Hall of Fame in Canton, Ohio but are not. Its been over 40 years for some legends and its a mystery if they will ever be selected to Footballs highest honor. Many of them have just been forgotten. These men defined a bygone era of Pro Football with their brilliant performances. They were the men who made the game and were some of the most exciting players to ever play Pro Football. Many of these guys were pioneers and trailblazers in the 50s, 60s, and 70s. They were stars who showed us how to play their positions and did it in a professional manner. These players provided excitement and happiness to millions of fans across the country and were part of the most popular sport in the world. Lets hope they receive recognition for their accomplishments and be selected to the Hall of Fame. These heroes and legends were just too good to be forgotten. Fans of all ages will enjoy this book.