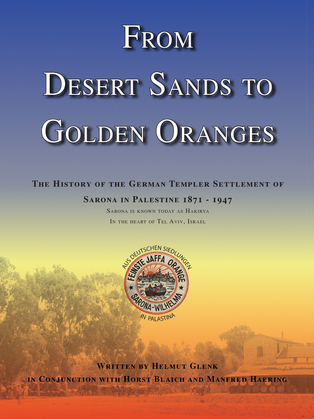 From Desert Sands to Golden Oranges

This book is an important episode in the history of the development and modernisation of Palestine in the latter 19th and the first half of the 20th Centuries. It portrays the significant contribution made by a small group of German settlers from Wuerttemberg in southern Germany during their 80 years in Palestine. This book focuses on the settlement of Sarona which was established as an agricultural settlement on the outskirts of Jaffa in 1871. Today the former Sarona village is an inner suburb of the bustling city of Tel Aviv, Israel.

The achievements of the German settlers, before the first significant Jewish immigration in the 1880s, demonstrated that European settlement was possible in the Holy Land. The settlers of Sarona left a proud heritage in the Holy Land, Palestine and Israel. Their buildings, their enterprises and their agricultural ventures will forever be remembered as having contributed significantly to the modernisation of Palestine and ultimately to the benefit of Israel.

"This fascinating account is a significant addition to the understanding of the Templer phenomenon that has left a noteworthy mark on the landscape of Israel until today."
Dr. Yaron Perry, Head of the Schumacher Institute, University of Haifa, Israel

"This well-researched book documents the history of the German Temple Society settlement at Sarona in Palestine. It is a fascinating and moving story of a settlement twice disturbed by war. The narrative is most readable and well-documented. The book stands as a memorial to the faith and achievements of the settlers."
Michael Ramsden, former Dean and Professor at RMIT University, Melbourne, Australia

"...a live picture of the colony, its cultural faces, the material culture, and the historical context..."
Dr. Danny Goldman, Architect and University Lecturer, Tel Aviv, Israel

"This book is an especially important contribution towards the history of Palestine. The swabian Templer settlement of Sarona was the first modern agricultural settlement in Palestine and was reputed to be a model settlement by the Jewish immigrants."
Dr. Jakob Eisler, Historian, Haifa, Israel