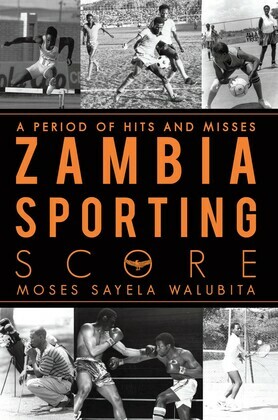 ZAMBIA SPORTING SCORE is a historic account of Zambias golden era, when the country produced some of the greatest athletes in Africa. It goes back to the pre-independence days when the country was the British colony called Northern Rhodesia. Among the many sportsmen and women covered in the book are Yotham Muleya, the long-distance runner who died in a car accident while on tour of duty in the United States of America, The Flying Sikh Satwant Singh (motor rally), veteran judo administrator Father Jude McKenna and Lottie Mwale, who was a formidable boxer whose ring name was Kaingo (the Leopard). Lottie was the All-Africa and Commonwealth light-heavyweight boxing champion when he also went to America to have a go at a world title.

ZAMBIA SPORTING SCORE records the medals brought home from the All-Africa, Commonwealth and Olympic Games. Zambia scored successes in golf, soccer, and other sports at continental and global events. Then came an eclipse, a period when Zambia only boosted the number of participating countries in international competitions. What drove athletes of the period to success? Is Esther Phiri, the current Queen of the Ring, recapturing that lost glory? This inspiring, well-researched and authoritative book is a must to read for everyone. The opening of the International Olympic Committee (IOC) Youth Development Centre in Lusaka, Zambia; will produce sportspersons of the calibre covered in the book.

All Zambians everywhere held their collective breath just before Stophira Sunzu of the Zambian Football team Chipolopolo boys kicked the penalty. When he scored to make the penalties 8-7 to beat Ivory Coast, pandemonium broke, wild celebrations, jubilation took place on the field and all over Zambia and among well-wishers everywhere. Most of us did not go to bed until the wee hours of the morning. Zambia had just won the most prestigious soccer cup trophy on the continent: The Africa Cup of Nations. This cup had eluded the nation since Independence in 1964. During all the celebrations, Zambians have remembered the National Soccer team that perished in 1993 in a plane crash in Gabon. This may be the right time to ask all Zambians whether we know enough about our Zambian heroes in not just football or soccer, but many other sports.

Do you know who in Zambia were at one time the Muhammad Ali of Boxing, the Pele of the country or the greatest soccer player, or who was the best long distance runner? The easy to read book Zambia Sporting Score by Moses Sayela Walubita is what you urgently need at this point in our proud nations history. ZAMBIA SPORTING SCORE describes Zambian achievements in 16 sports in such well known and popular sports as Soccer, Boxing, and Athletics but also less popular sports in Zambia including Netball, Volleyball, Table and Lawn Tennis, Golf and many others. The book describes sports in the Southern African country of Zambia from the 1950s when the country was a British colony of Northern Rhodesia. It describes Zambias greatest sports personalities, team sports, and their achievements.

In the country's number one sport of soccer, the book describes the performances of such Zambias legendary players as Ucar Godfrey Chitalu; who is perhaps Zambias best and most dazzling soccer player ever. Samuel 'Zoom' Ndhlovu and Kalusha Bwalya will forever be etched in the history of soccer and sports in Zambia and beyond. Chitalu is by far Zambians equivalent to Pele of Brazil soccer great. Chitalu in one soccer season in 1972 scored 107 goals facing stiff premier club and international defenses. Chitalu was a deadly striker who left goalkeepers sprawled on the ground diving to save his shots. He was Zambia's scoring machine long before the era of Kalusha Bwalya, the 1988 Africa Footballer-of the Year.