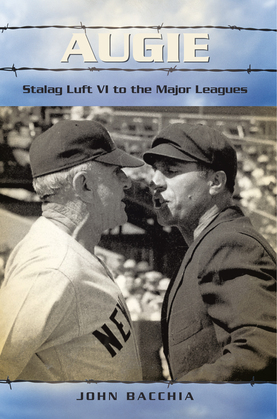 Emmy Award-winning sportswriter/producer John Bacchia shares the incredible, never-before-told story of Augie Donatellione of Major League Baseballs unsung men in blue. A coal miner from Bakerton, Pennsylvania, Donatelli served his country as a tail gunner aboard a B-17 and found his lifes calling in the bleak con?nes of a Nazi prison camp.

When Army Air Corps Sta? Sergeant Donatelli umpired softball games to boost morale for his fellow airmen at Stalag Luft VI, little did he know he was taking ?edgling steps towards becoming one of the most respected umpires in baseball history. However, prior to the end of the war, he would be subjected to a brutal black march across war-torn Europe before orchestrating a daring escape.

Less than a decade after serving his country, Donatelli found himself at the pinnacle of his professionumpiring in the 1955 World Series between the Brooklyn Dodgers and New York Yankees. Hardened by his war experiences and his years of working in the coal mines, Donatelli hustled on the baseball diamond as if his life depended on it. He gave his heart and soul to the game he loved. Yet despite ?nding his dream occupation, Donatelli voluntarily put his career and livelihood in jeopardy, as he and his fellow umpires, Shag Crawford, Jocko Conlan, Al Barlick, and others, spearheaded the formation of the ?rst umpires union, the Major League Umpires Association.